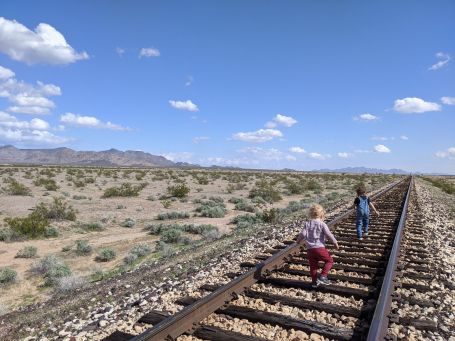 We crossed the Colorado River and waved goodbye to California! We will not be back for a really long time and crossing that random bridge into Arizona was very bittersweet. But before leaving California, we did find this amazing place on the side of the road to stop so a child could use the bathroom.

BUT…Arizona welcomed us well. We stopped over for one night in Bouse, Arizona at Bouse Community Park, a small RV campground. It had a playground, a nice host whose hometown is sixty minutes north of ours, a place for our rig, and turns out a ton of rusted metal and broken glass for us to pick up. So you know, a win for us. 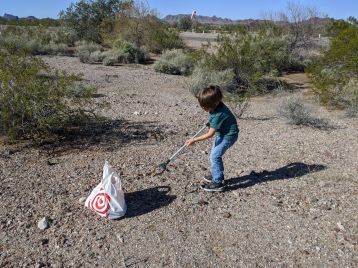 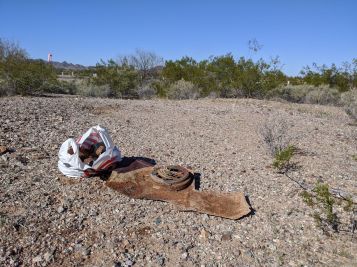 The rest of the week was spent in the Verde Valley area of Arizona. It is magical here. Full of history, ruins, and splendid cliffs. Also, a ton of roundabouts. This is how we spent our first week. You can see how we spent our second week in the area here.

This was Katie and the boys’ first adventure into the area. It was an easy stroll next to the Verde River, but it appears a flash flood came through fairly recently and the area is quite a mess. The trail is well marked, despite a few trail detours to avoid some of the flood damage. But overall this is not a beautiful trail in February. Maybe when the tress have leaves, it will look prettier. The kids still enjoyed searching for river access to toss rocks and sticks and they loved randomly finding cactuses along the path. 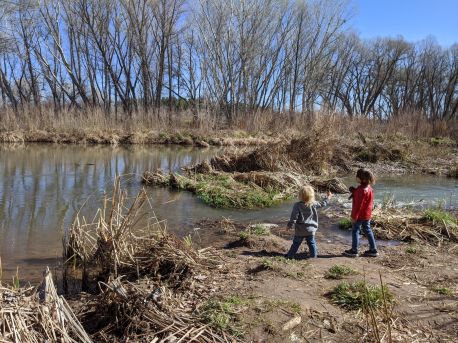 We decided to check this monument out after Doug finished work one afternoon. Turns out the kids and Katie were getting sick, as we found out the next morning, so the trip was sort of a bust. BUT, we still got to see these amazing ruins on top of a hill. The kids found Metate artifacts (rocks used for grinding corn) in several of the rooms in the ruins and decided those were all kitchens. We were rushed due to the kids’ fussy nature, so we probably only spent 30 minutes here. It was worth the trip, but more time is needed to fully appreciate it. Despite their crankiness, both boys were able to earn their Junior Ranger badge. The family photo is hilarious because it totally shows how our afternoon was going, but when some nice stranger offers to snap a family photo it cannot be turned down! 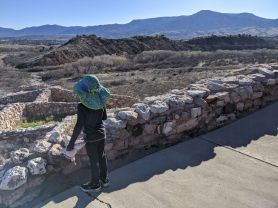 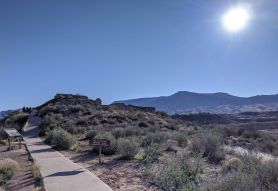 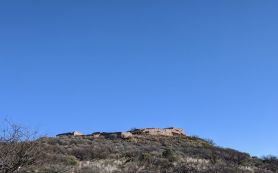 It happened again! We met another fulltime traveling family! To meet up, we decided to check out this National Monument. It was gorgeous and well worth the trip. Walking around near the edge of the cliff full of what used to be homes, was breathtaking. Even though our children do not fully understand what they are experiencing, it is still worth it to show them how other cultures lived. Plus, Katie is pretty much in hog heaven, what with the experiencing ruins and so much culture! The boys also both earned their Junior Ranger badge. We also enjoyed the company of the other family, so we made plans to hike with them again! 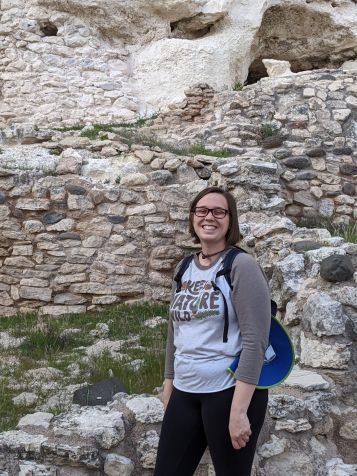 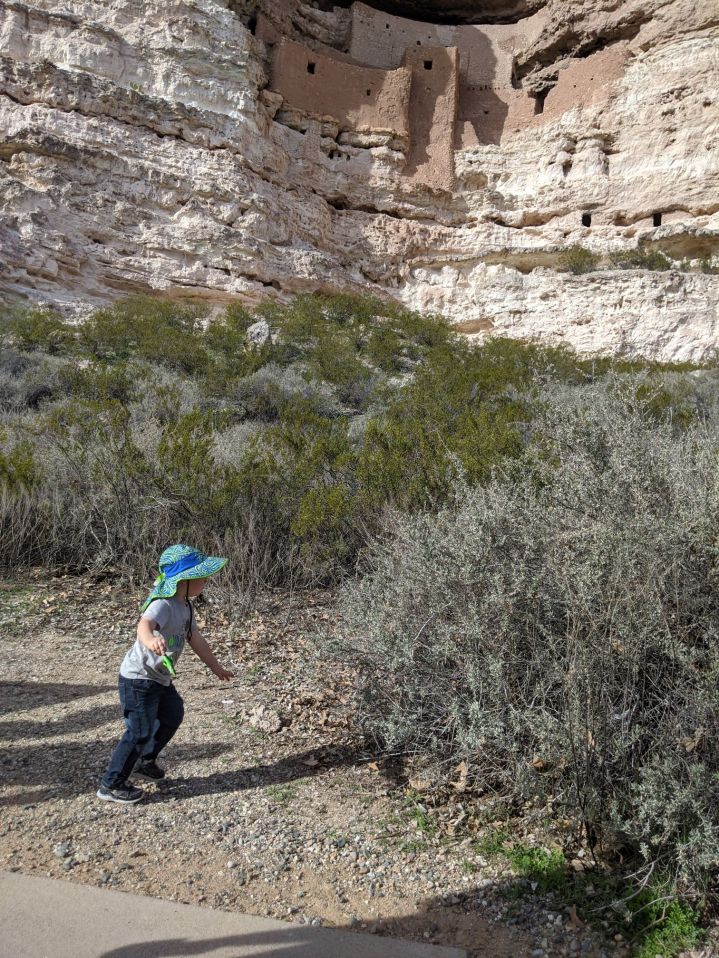 This state park has a hilarious name, so Katie could not pass up visiting it. Upon entering the park, it was not immediately beautiful, but as the road inches toward the lagoons, it gets a little prettier. Katie and the boys were not walking five minutes when they saw ducks and a pond turtle of some sort. They also saw a great blue heron, some cormorants, and a ton of great-tailed grackles. There were several people fishing, so naturally the boys wanted to do it too. Lucky for Katie the fishing pole was safely back at home. Knowing this, both kids quickly decided Doug would be able to take them back later to fish. Unfortunately for Doug (and the kids to some extent) the fishing pole was brand new. The line had not been put together and it kept getting tangled. Luckily for all, the kids were just stoked to be there near the fishing pole, so they did not mind that out of the two hours they were near the water, only 30 minutes (not consecutive) was spent fishing. 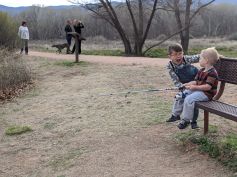 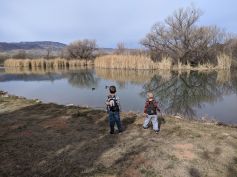 We spent all of Saturday here and while the kids appeared to be completely unfazed, the red rocky cliffs and mountains surrounding Sedona are stunning. They are breathtaking. They made us consider settling down here when we finish traveling. BUT, then we did a quick search average summer temperatures and it is no longer a consideration. But our day in gorgeous red rock heaven was very well spent.

We began our day by hiking an enormous rock shaped like its namesake. It resembles one so much that the five-year-old immediately knew where we were headed when it came into view. This is a very popular outdoor destination. For how popular it is, the parking lot is tiny and we spent a solid 15-20 minutes circling the parking lot waiting for a spot to open. Then we paid $5 for a day pass to hike for an hour. But that hour was one of the best hikes we’ve done thus far. It is pretty easy going, though the kids wanted to hike up the rock, so there was an incline. The trail is incredibly well marked and easy to follow. It was the highlight of our day and comes highly recommended by our family. 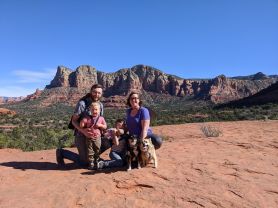 While this trail did not surpass Bell Rock in the best hike categories we have mentally running through our heads, it did make up for it by being a well shaded trail. This is another popular trail, but maybe all trails in Sedona are popular. It sure seems like it. Anyway, the trail goes through a canyon, so there are nice cliffs on both sides and some neat shade trees. We did not make it to the end of the trail because the kids were tuckered out, but it was a great experience. Oh and it was hard to keep the kids moving because the red dirt is apparently the best thing ever and there is no need to hike when there is so much fine, loose dirt to play in. 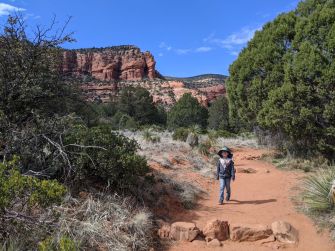 We ate lunch at an amazing restaurant called Wildflower Bread Company and it was delicious. We chose it because it was central to both our hikes and because they have a balcony that are supposed to have some great views of those red rock beauties. Unfortunately for us, the patio with a view is not dog friendly and it was too hot to leave them in the car. Luckily for us, they had another patio without a view and the food was delicious, which more than made up for our lack of a view while we ate.

We stopped for dinner at a Oak Creek brewery. Again this place had a patio that was not dog friendly, but the heat of the day was gone and the dogs were happy to rest in the car while we gorged ourselves. The beer was good, but the food wasn’t great. We still enjoyed ourselves, because beer.

On Sunday we hiked a mountain up to a cave. We did this before in Truckee (read about it here) and the pay off was a really tiny cave with a great view. It was a fairly treacherous hike and totally not young child friendly, but we rocked it. Today was a bit different. First, it wasn’t really a cave at the top. It was actually Native American cliff dwelling ruins that are not a part of any protected park and they were amazing and there were a ton to explore. Second, the trail was well worn, so even though it was full of loose rocks it was much more manageable to climb up. The two-year-old held Katie’s hand and climbed up and down without much issue. And finally, we didn’t explore it alone. We met another fulltime family and explored it together. There are pottery shards everywhere and it is amazing that the place shows no signs of vandalism. The photos of this place do not really do it justice. Like at all. We totally recommend this hike. 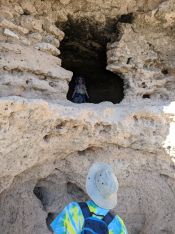 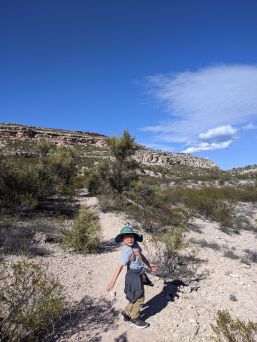 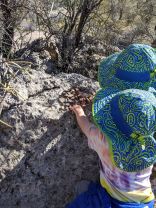 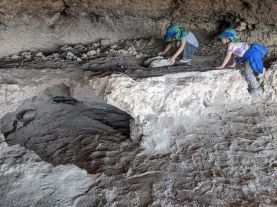 Other than hiking, we have enjoyed a lot of Mexican food, beer at Verde Brewing, sunny 60-70 degree weather, wild pigs exploring our site (apparently they enjoy the smell of empty dog food bags), and meeting new people. Oh and all the boys got haircuts. It was our first haircut on the road and while the reviews of the barbershop were good, it is not a place we would go back to or recommend. The cuts are all shorter than they were supposed to be and the guys were not super welcoming.

All in all our first week in Arizona and the Verde Valley have been really well spent. Stay tuned for the exciting tales to come.

On the road: 7 months